Unique has been a word tossed around to describe several hunting weapons that find themselves without a category. Weapons like the Benjamin Pioneer Airbow and some big-bore PCP air rifles created their own alt-hunting categories. Now Traditions, the company long known for budget-friendly muzzleloaders and centerfire imports, is the first to carve out a new space with the Crackshot XBR — a rimfire rifle that moonlights as an arrow launcher.

What is the XBR Crackshot?

The Traditions Crackshot rimfire rifle has been around for some time as a single-shot .22-caliber rimfire. It’s the addition of the XBR upper, bolts, and blanks that transform a vanilla rimfire into a spicy new platform. To fully understand the XBR Crackshot, one must first be familiar with Traditions basic rimfire cartridge Crackshot break-action rifle. That single-shot .22 LR wears a light 16.5-inch pencil barrel and weighs just a hair over 4-pounds making it an incredibly lightweight option by itself. It comes with a manual trigger block safety and a built-in extractor.

To make the exciting XBR, the Crackshot rimfire platform gets partnered with an alternate upper and will be selling as the XBR combination. Buyers get a complete Traditions Crackshot rifle in .22 LR, but the star of the show is the swappable XBR upper complete with three Firebolt arrows. That XBR upper is easily interchanged with the .22 LR upper, giving shooters two platforms in one package. It’s neither a crossbow nor an airbow, and sometimes not even a rifle. Call it what you will, but the XPR is in a class all its own. 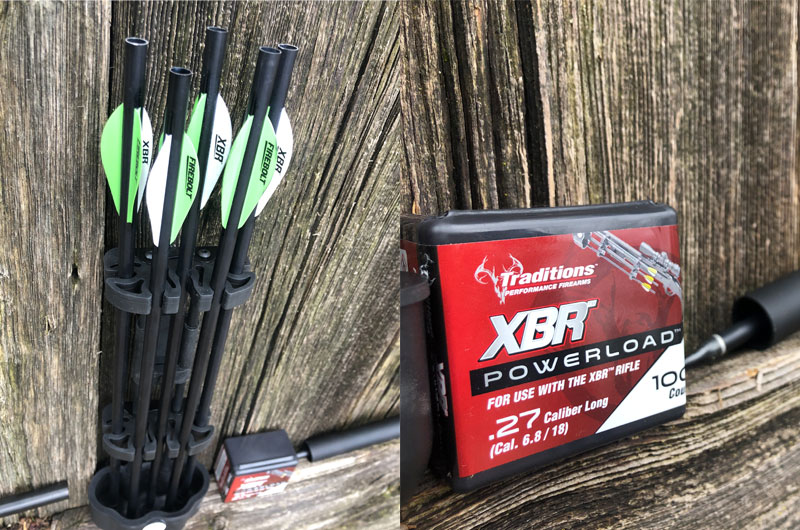 If you want to sling arrows out of the XBR you’ll need their proprietary arrows and blanks. (Photo: Kristin Alberts/Guns.com)

The XBR upper has an inner “barrel” inside a larger shroud, which allows shooters to slide the hollow and nockless Traditions Firebolt over that internal piece. With the arrow in place, breaking open the action reveals a chamber for a proprietary .27-caliber blank that is classified as a .27 Caliber Long. Firing is as simple as loading the blank, closing the action, disengaging the safety, cocking the hammer, and pulling the trigger. The company warns its proprietary .27-caliber blanks are not interchangeable with construction-grade blanks due to pressure concerns. No worry, though, XBR Powerloads come in a 100-pack for a retail price of $24.95 and are readily available online.

Is it Legal to Hunt with the XBR? 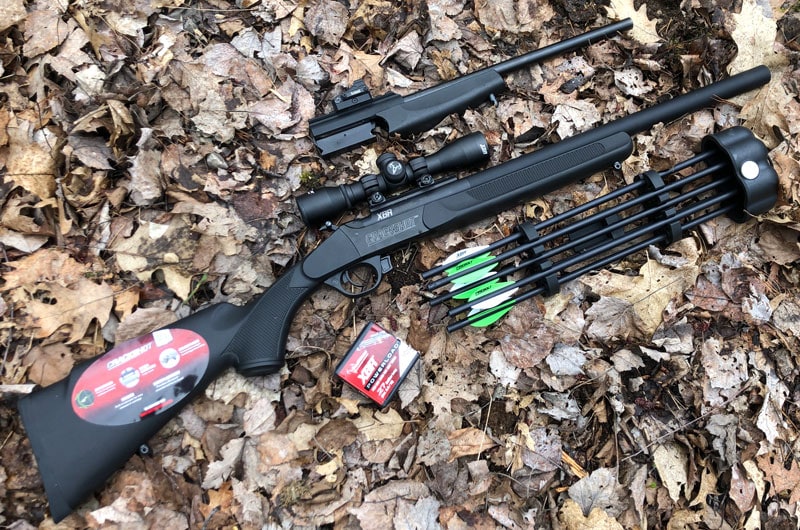 Before you go on a hunt with your Crackshot XBR make sure it’s legal to hunt with in that area. (Photo: Kristin Alberts/Guns.com)

Since the XBR is technically a rifle using blank metallic cartridges to launch arrows, there’s more confusion than clarity when it comes to the legality of hunting with the XBR. In short, legality varies by state, with very few allowing it for anything other than traditional firearms seasons. Due to its novelty, it’s best to keep an eye on company releases for any legal news or changes. Better yet, contact your state directly before heading into the field with the XBR. Word of caution, though, we contacted our local Department of Natural Resources and received different answers each time, so the saga continues.

We were pleasantly surprised by the weight of the XBR, both as a rimfire rifle and an arrow launcher. We already knew the Crackshot rimfire barely broke 4-pounds, but even with the bolt launching upper in place, the rig registers under 6-pounds.

We started our range work by firing the rimfire Crackshot rifle. The rimfire shot with the expected accuracy from a relatively short pencil barrel, but would do just fine for small game, cheap plinking, or even as a starter rimfire for youngsters. Speaking of youth, the length-of-pull on the gun is 13.75-inches, so though it feels like a compact rimfire, the pull is actually full-size. Our biggest knock on the platform, which translates to the XBR, is the trigger. With a trigger pull that measured from 9.25- to 10-pounds on our Lyman Digital gauge, it takes some practice to get comfortable and shoot with the greatest potential accuracy. 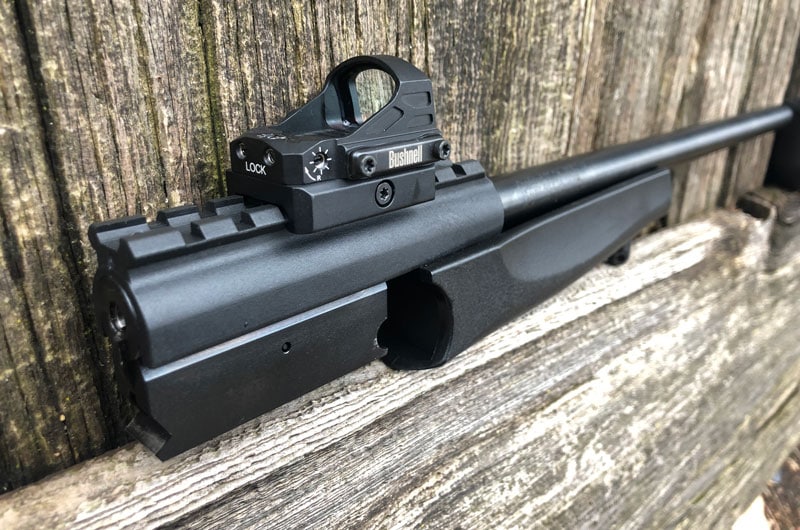 We opted to mount a Bushnell red dot on top of the Picatinny rail for our rifle shooting. (Photo: Kristin Alberts/Guns.com)

Swapping uppers was easy enough to do in the field. The operation requires nothing more than a metric Allen wrench. Removing the forend on either upper allows it to be removed from the open action. The rifle’s forend is held in place by the forward sling swivel, while the XBR uses an Allen-head bolt. The only hitch was that the forend hole on our XBR upper did not align perfectly with the lower and required a bit of minor home fitting. 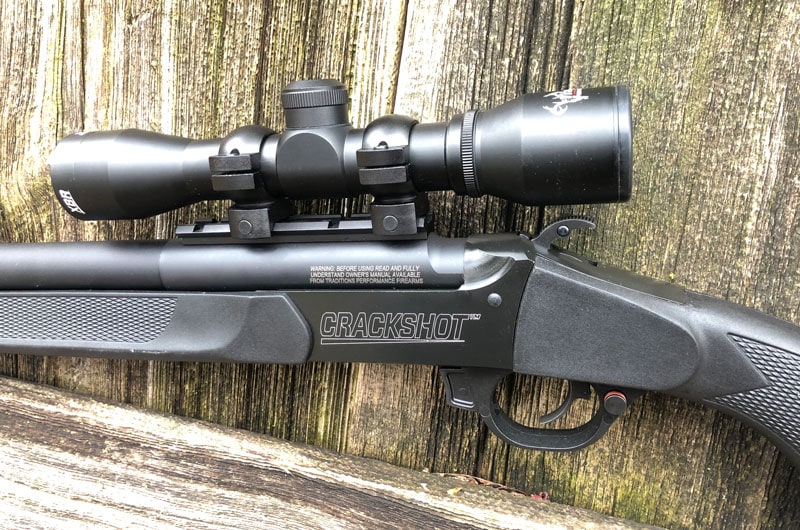 With the XBR upper in place, we fired bolts at 15, 25, and finally 50 yards and were pleasantly surprised with the accuracy. For hunters accustomed to shooting both compound bows and crossbows, the Crackshot XBR is quite a departure. It’s more than a stretch to consider this an archery weapon with neither string nor nock. Though in its own category, we found the XBR Crackshot to be very capable in terms of trajectory and impact on target. The company advertises capable killing power out to 70 yards, but we only stretched it to 50 yards on the range. Both 3-shot groups and penetration into the bag were impressive at that distance, however. While the trigger does not aid accuracy, the included Traditions 4×32 scope does. The reticle is comparable to the BDC found on crossbows, with four stadia lines for various distances, depending on where the shooter wants to zero.

Though any shooter can enjoy the benefits of the XBR, Traditions is particularly targeting those who may not be physically able to use a crossbow or compound bow. Standard fixed broadheads are recommended, though company reps were confident in the performance of mechanicals opening on impact as well.

One of our initial hang-ups was acquiring .27 Caliber Long blanks, but Traditions sells them in bulk 100-round packs for a reasonable enough price. A few boxes should be a long-term supply. Like any of these proprietary systems, unless they hit mainstream popularity, the only place you’ll find blanks, bolts, and any other necessary parts will be directly through the company. We advise stocking up sooner rather than later, just to be sure.

The Crackshot XBR package does not include the quiver or blanks, but both available as additional accessories. In addition to the standard black synthetic, the XBR is also available in two camouflage patterns–Kryptek Highlander Reduced and Realtree Edge. MSRP on the combos is $499 and $579, respectively. For what it’s worth, the rimfire Crackshot rifle by itself in black synthetic retails for $219.

While we were skeptical of both the purpose and enjoyment of the Crackshot XBR, getting it into the field more than quelled those hesitations. The Traditions Crackshot XBR is proof that a weapon doesn’t need to fit neatly into a category to be both enjoyable and useful.

GET AN CRACKSHOT XBR!