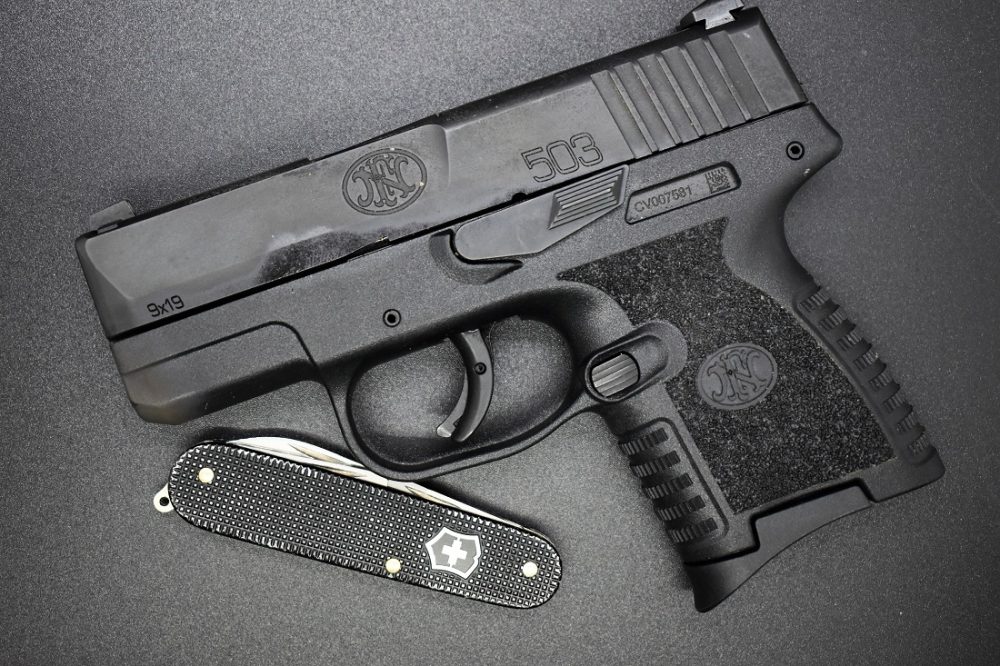 The smallest pistol that the storied firearms maker has produced in the past 40 years, the new FN 503 is a micro-compact 9mm that can fill a lot of needs for today’s gun buyer. (All Photos: Chris Eger/Guns.com)

Earlier this year FN launched the FN 503, a slim, 6+1 shot single-stack 9mm that is the company’s smallest handgun in generations, and we have been putting it through its paces.

Once upon a time, FN was known for making the smallest, most compact handguns on the market. These included John Browning’s Mle 1900, Mle 1906 Vest Pocket (which predated his Vest Pocket for Colt by two years), Mle 1910, and the Browning Baby. 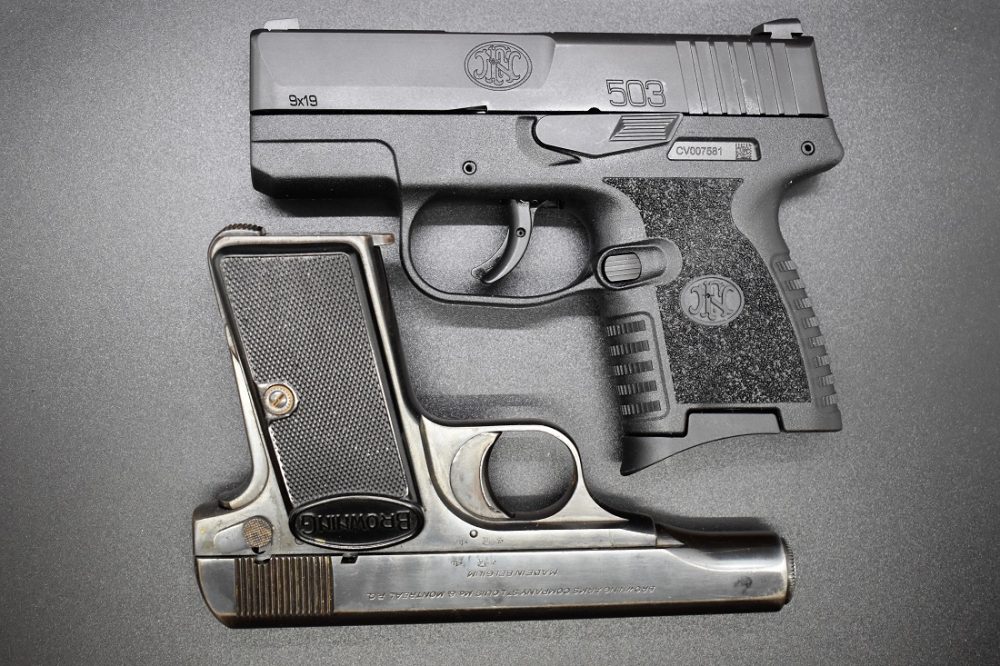 Fast forward to the 1980s and all of those classic designs were put to bed. To fill this hole in their catalog in recent years, full-size polymer-framed double-stacks like the FNS and FN 509 have been chopped down to more compact designs, but they were still pretty chunky compared to Mr. Browning’s early guns.

FN, making up for lost time, came correct with the 503 model which debuted in March. The new pistol has a 3.1-inch barrel with recessed target crown which contributes to a 5.9-inch overall length. Some 4.6-inches high, the gun is slim– with a width of 1.1-inches overall. 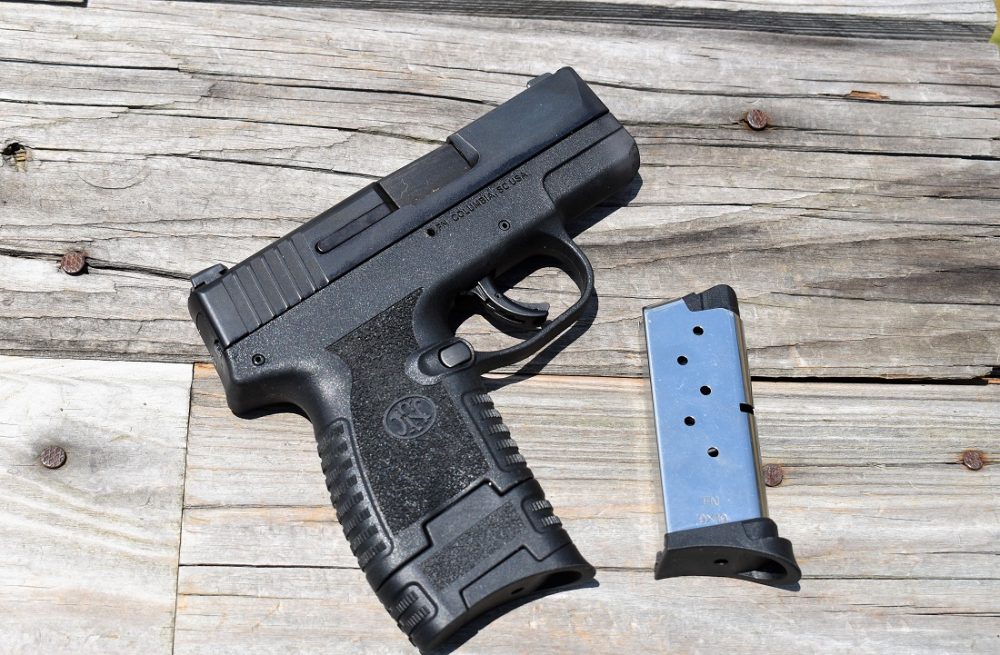 The mags include a flush fit 6-rounder with a pinky grip extension and an extended 8-shot mag with a grip sleeve that adds about an inch to the height. 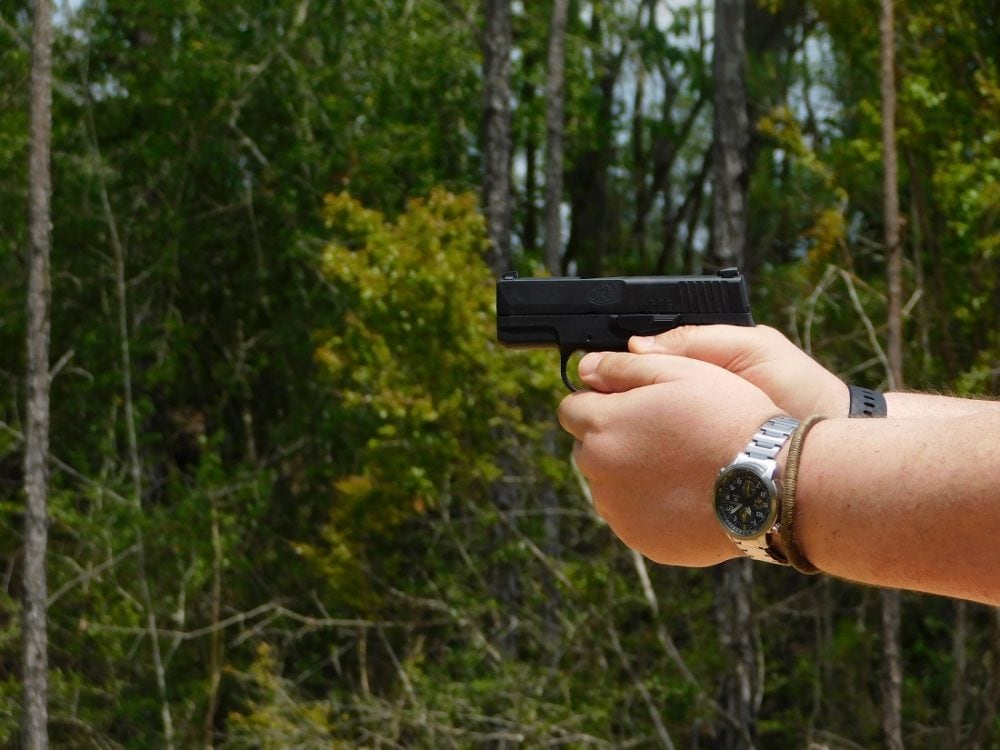 The South Carolina-made FN 503 has a clean look to it, although kind of blocky, and handles well.

The ergonomics of the FN 503 are just what you want from a carry gun. The pistol balances well, even when you factor that it is a stubby little guy, and doesn’t float around in your hand. The rear slide serrations are deep enough to provide plenty of purchase. The extended slide stop and the fenced-off reversible magazine-release have a raised texture.

Speaking about that texture, the grip is aggressive, which is something I like. Some chafe at strong texture (see what we did there) but it is something that can be modded by the end-user with some sandpaper. You can always remove the texture, but it is a lot harder to add it so the fact that the FN 503 is super grippy puts it to the better end of the scale in my opinion. 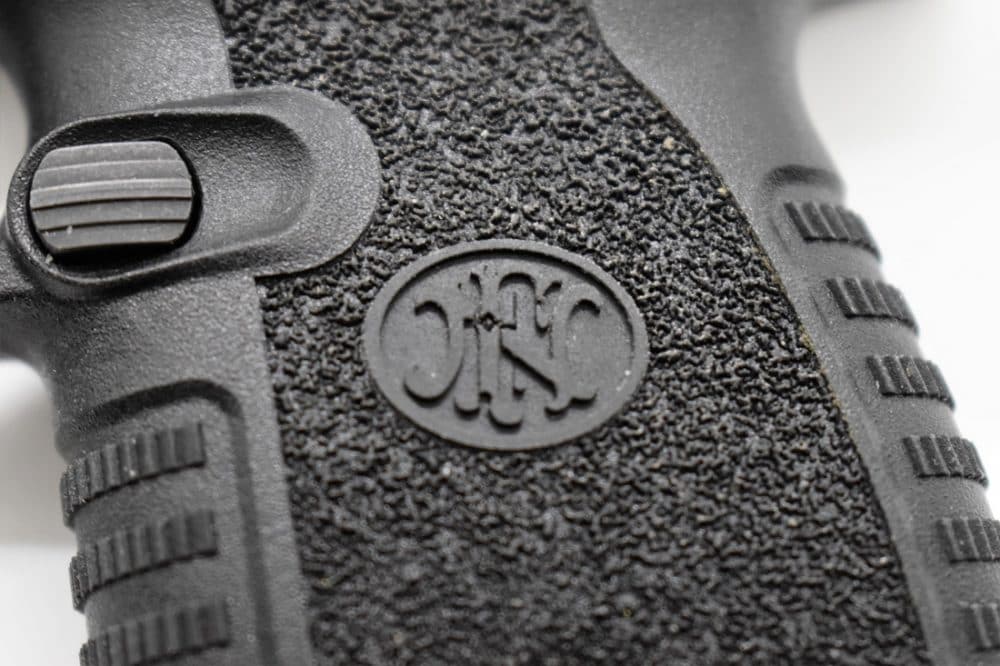 The grip texture was on point.

The gun felt great in the hand, especially with the longer mag inserted, and is well built, with good fit and finish, perhaps better than in many “plastic fantastics” which are often built with economy in mind. The longer magazine, of course, leads to a larger footprint on the pistol. A solution could be to carry the 6-rounder inserted and the 7-round mag as a backup on the “one is none, two is one” mantra of EDC. 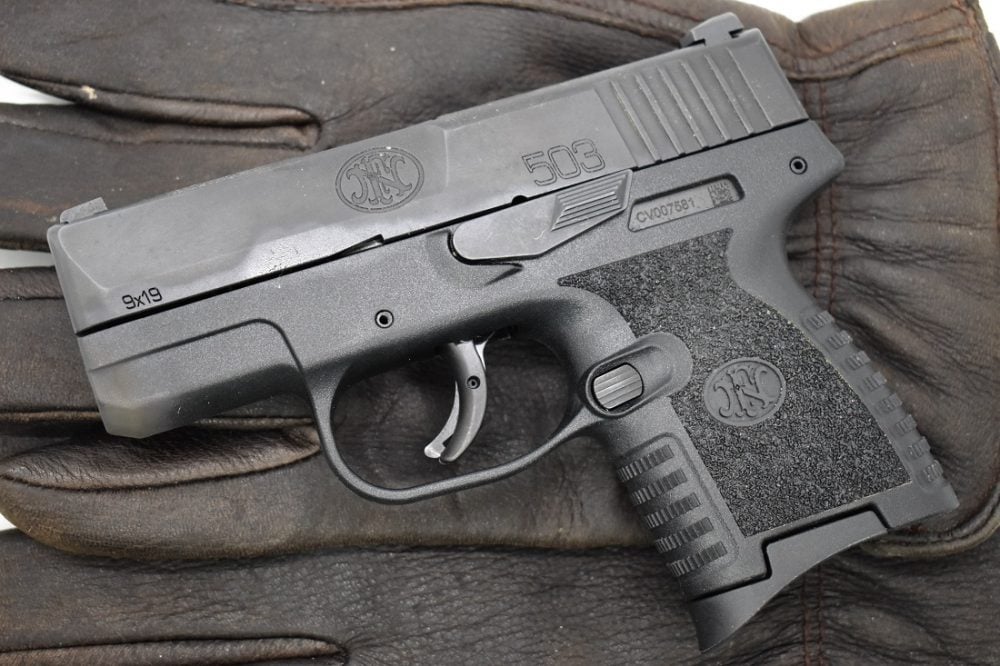 We tested it with gloves– which was hot in Mississippi in June– and found the wide trigger guard allows for it.

In the course of a few range trips, we ran a bit over 500 rounds through our fresh-from-the-box FN 503, mostly Federal American Eagle 115-grain 9mm. With that being said, we also made sure to drop some Wolf, PMC, and Winchester loads through the gun as well as some with 124- and 147-grain bullets and both FMJ and JHPs. Of those loads, we had one jam– encountered on round 2 which we chalked up to not having the magazine fully inserted. Zero issues from round 3 through 500. 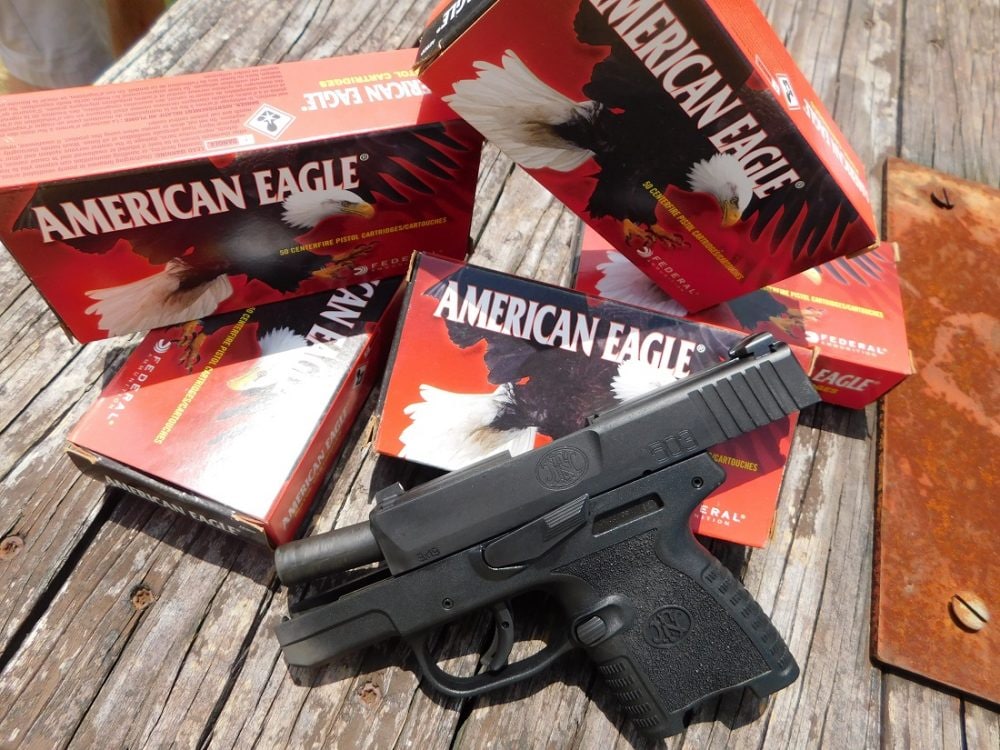 The bulk of what we shot was Federal American Eagle red box 115-grain FMJs.

The slide locked back on an empty mag time after time. The mags positively drop free. The full-length steel chassis lends to less “flex” in the firing cycle. A sturdy gun, it proved controllable and was easy to recover, shooting very flat. 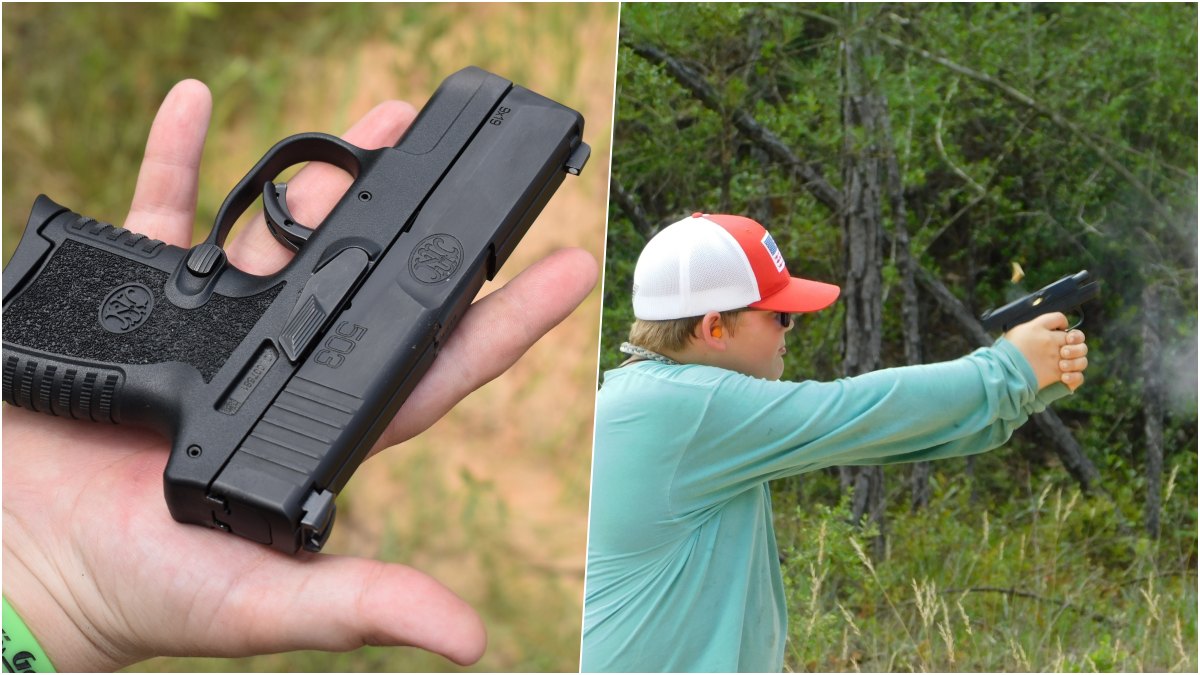 We had an experienced 12-year old junior shooter put about 200 rounds through the FN 503, using the shorter mag (with tons of reloading!) and he had no problems. 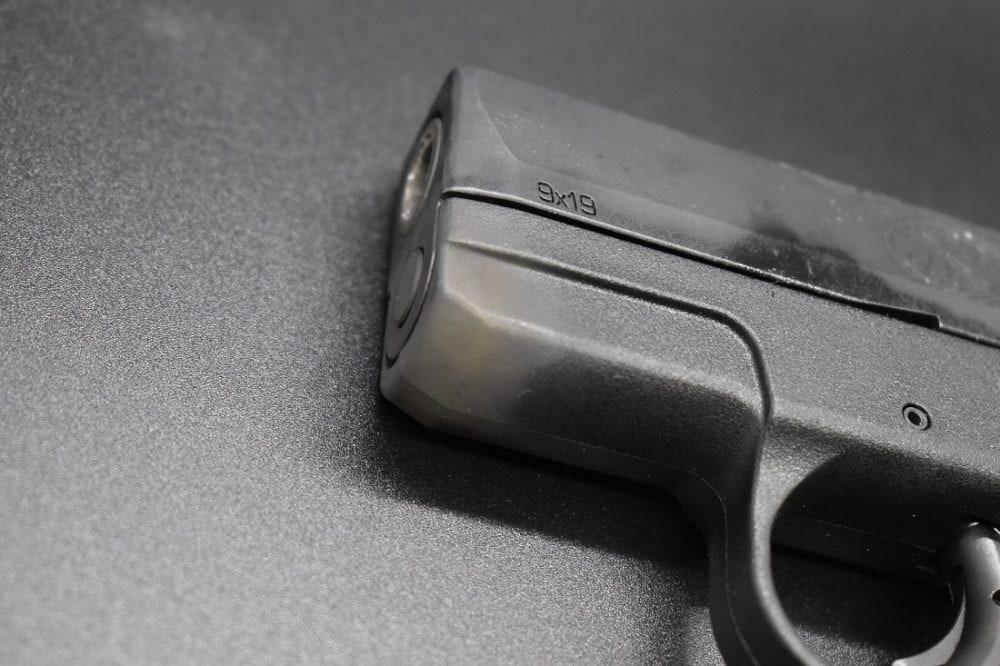 After 500 rounds, the FN 503 seems to be holding up well, with about the most wear shown in grime build-up at the muzzle. We haven’t cleaned it yet and don’t plan on it until the testing is complete.

Trigger pull was right at 5-pounds every single time we tested it, which is a lighter than many polymer-framed guns of similar size, namely the Sig P365 and Glock G43. The trigger is all-metal with a safety insert and felt fairly crisp for a factory striker-fired gun. It did have a little bit longer reset than I would like but it wasn’t anything that ruined my day. I have seen worse. FN describes the trigger as “best in class,” which is probably not that hyperbolic.

The barrel has a polished feed ramp and is target crowned and recessed– something you don’t expect on a palm-sized handgun. Just 3.1-inches with an equivalent sight radius, it is not geared to long-range accuracy but you have to keep in mind this is a slim single-stack 9mm envisioned for concealed carry. 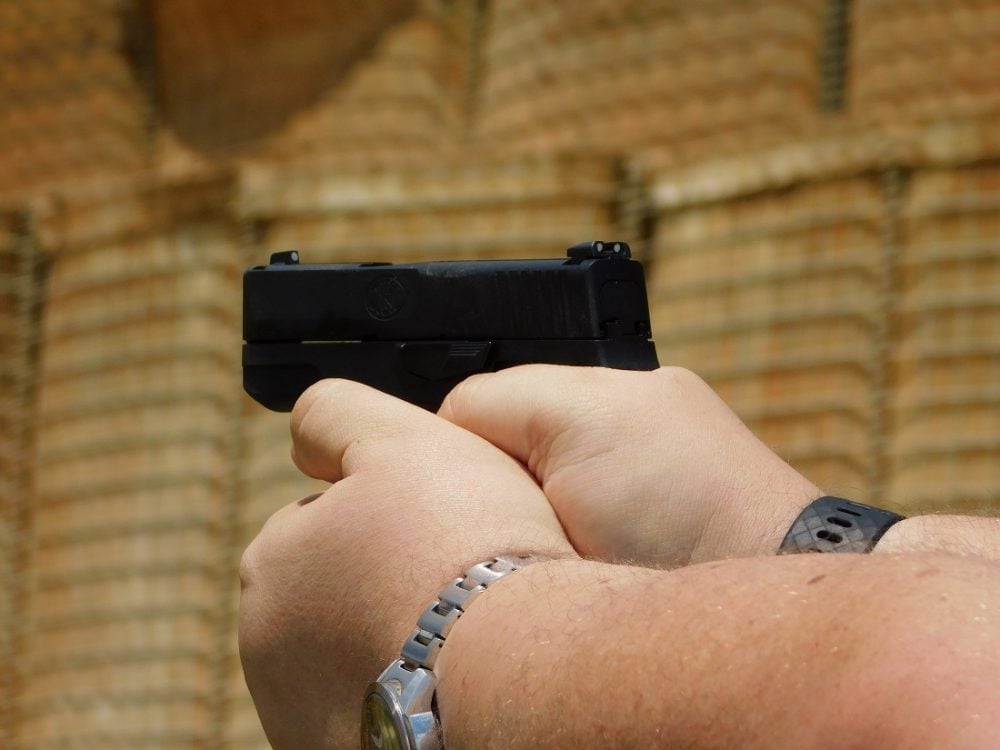 The white three-dot sights are easy to acquire and feel right. Further, being steel rather than plastic as often seen today, they allow for realistic one-handed emergency manipulation of the slide if needed.

While not breaking out the lead sled and match ammo, close-in accuracy while shooting off hand was decent, with the gun able to consistently pop plates at 10 yards. Pushing out to 25, it was still on paperman torso. 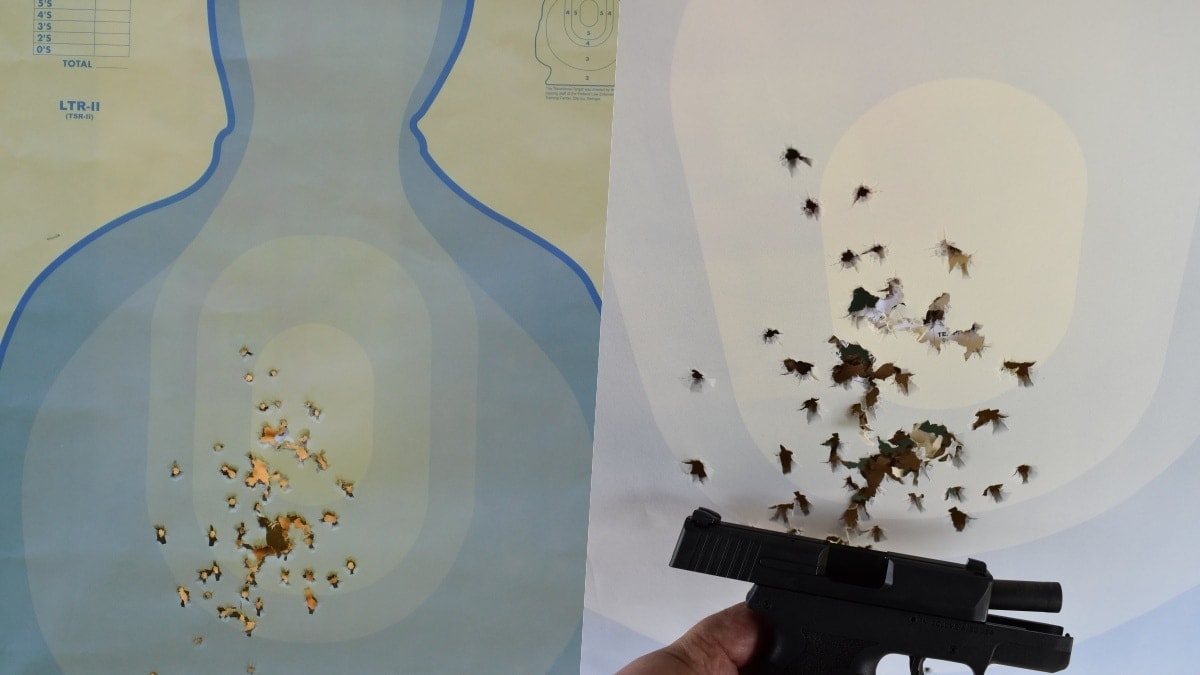 This is a 100-round spread at 25 yards/75 feet with the shorter mag/grip. The low and to the left spread is more an issue with the shooter rather than the gun. We did notice that the gun proved a bit more accurate with the longer mag/grip inserted.

The FN 503 is a good compromise that delivers a gun with the same action as a full-sized/compact FN 509 but in a sub-compact design that is ideal for concealed carry, deep carry, or as a backup gun.

About the worst rock you can throw at the FN 503 is that, with its single-stack capacity, it is kinda behind the curve when compared to guns like the Sig P365 and Springfield Hellcat. For FN fans looking for a slightly larger double-stack in the same flavor, the FN 509 Compact series, which has a standard 12+1 capacity and the capability to accept all higher capacity FN 509 magazines, could be an option. 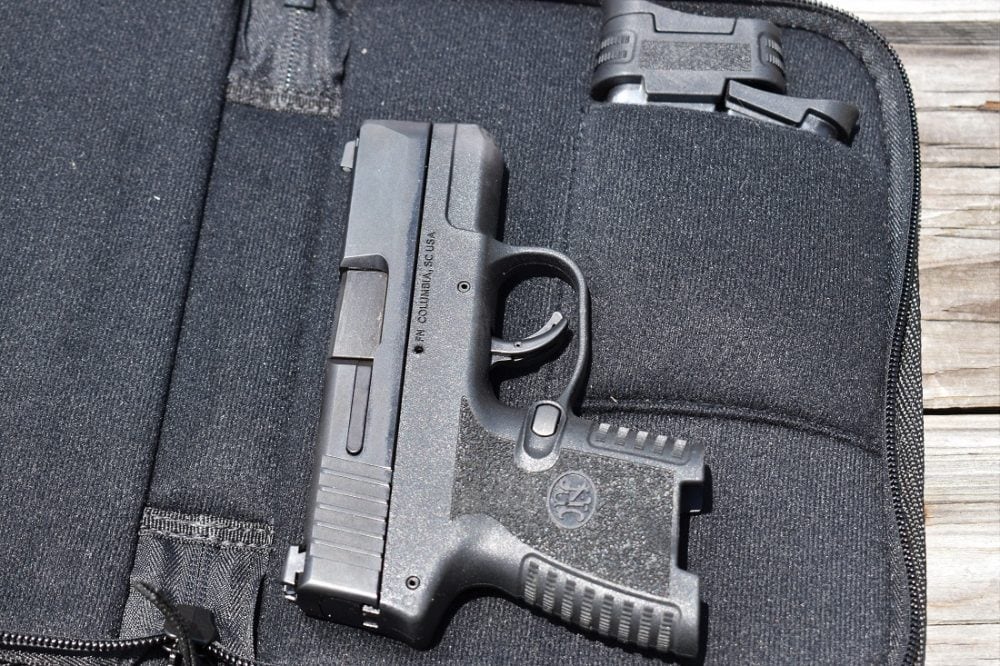 The FN 503 ships in an FN-branded zipper case and has two mags. MSRP is $549, a price lower at retailers.

We are continuing our test and eval of the FN 503, hoping to push it out to 2,000 rounds while putting at least 100 more hours of carrying on it, so watch this space for that review in the coming weeks.